Public and Private: the chancel arch

The chancel arch of a church marks the important boundary between lay and priestly zones.  In the Anglo-Saxon church of St Lawrence, Bradford-on-Avon (Wiltshire) this arch is no larger than a doorway into the chancel, emphasising its status as a private priestly domain. By the mid-eleventh century chancel arches had become wider, but sometimes retained a monolithic solidity, like that at All Saints, Wittering (Soke of Peterborough) perhaps suggesting the notion of fortification.

The massive chancel arch at All Saints, Wittering

The rood, an image of Christ on the cross often flanked by standing figures of the Virgin and St John, with angels flying above the arms of the cross, was painted or carved in relief on the east nave wall above the chancel arch in Anglo-Saxon churches. At Bradford-on- Avon the central part of the wall has been rebuilt, and Christ is lost, but the angels remain near the top of the wall.  Something similar survives at St Andrew, Nether Wallop (Hampshire), where the Anglo-Saxon chancel arch was replaced with a much taller and wider one c.1300, removing the rood but leaving the angels more or less intact. At Breamore and probably also at Romsey (both Hampshire), the rood over the chancel arch was moved to another location when  it was no longer convenient in its original position.

The rood at Breamore, moved from the chancel arch to a position above the south doorway

From the twelfth century onwards, several tendencies in church architecture combined to render obsolete the rood painted on the east nave wall. Lower and wider naves replaced the tall Anglo-Saxon type, and chancel arches grew in height and width. Communication between the nave and the presbytery remained restricted by the introduction of a screen with a narrow central entrance, although such screens were usually of tracery, which allowed the laity to see what the priests were doing. 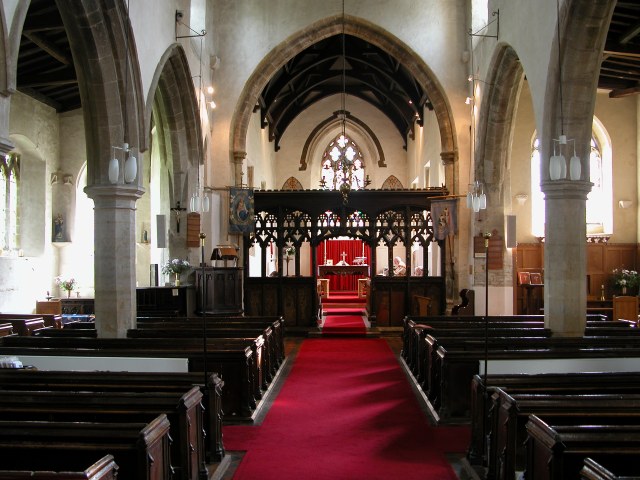 The congregation’s view into the presbytery at St Mary’, Bozeat (Northants). The chancel entrance is narrow but the laity get a good view of the ritual

The rood was still needed, however, and from this time it was generally mounted on a beam at the top of the screen and under the chancel arch, approached by a stair at the north or south end.  At St Mary of the Assumption, Ufford (Suffolk) the rood beam and the base of the screen are still in place, while at St Petronilla’s, Whepstead in the same county the rood stair survives in the south nave wall but the rood beam is lost.

St Petronilla, Whepstead. The rood stair remains in the south nave wall, but the rood is no longer there.

Surviving rood stairs are by no means uncommon in parish churches, but often the only evidence for a screen is found in chancel arch capitals and imposts cut away to accommodate it, as at Hanslope (Bucks), Kempley (Gloucestershire) or Bruera (Cheshire).

At St James, Hanslope grooves have been hacked out of the Romanesque capitals and impost blocks to house a later screen.

Roods and screens are very much secondary elements in church building; added after the architecture and its sculpture defined its spaces, and arguably always seen as subject to change.  What is striking about the structure of the chancel arch, however, is that there is a clear tendency for its two faces – the western public face and the eastern clergy face – to be very different. For the laity the chancel arch was, especially in the twelfth and early-thirteenth centuries, an elaborate frame for the sacred ritual. The clergy had a different view – of an arch that was almost or entirely plain.  This was achieved by the use of multiple decorated orders on the west face only, so that the chancel arch almost operated like a picture frame and in one direction only.  To take a random example, the chancel arch at St Peter, Rowlestone (Herefordshire) is lavishly decorated on the nave side, while the chancel face is quite plain.

The chancel arch at Rowlestone. The west face (left) has elaborate carving while the east face (right) is plain

Such examples could be multiplied indefinitely; it is practically a rule, and for architectural historians it offers almost infinite scope for speculation, which I am determined (as ever) to resist.

This entry was posted in Architectural features. Bookmark the permalink.

2 Responses to Public and Private: the chancel arch