Beakhead is the name usually given to a rich and varied collection of carved grotesque bird, animal and even human heads found in the architectural sculpture of the 12th century. The commonest form is the head of a bird with a long, curved beak that seems to grip a roll moulding in the order of an arch, but there are almost limitless variations on the type. At New Bradwell the birds’ heads alternate with cat-like heads with protruding tongues.

On the arches of the west front of Lincoln cathedral, beastly human heads take the place of the birds, and highly decorated beards or protruding tongues lie across the angle rolls instead of beaks

There is another variety of this ornament, less common but generally found in combination with normal beakhead. In this type the head of a beast is on the inner curve of the arch, facing outwards, and pairs of leaves issue from its mouth, giving the appearance of a shuttlecock.

A beast head voussoir from the cloister of Reading Abbey

Further decoration is often carved between the leaves: a pine-cone, or sometimes a second head. In the surviving sculpture from Reading Abbey cloister, these beast heads alternate in the arches with the commoner bird beakhead type. 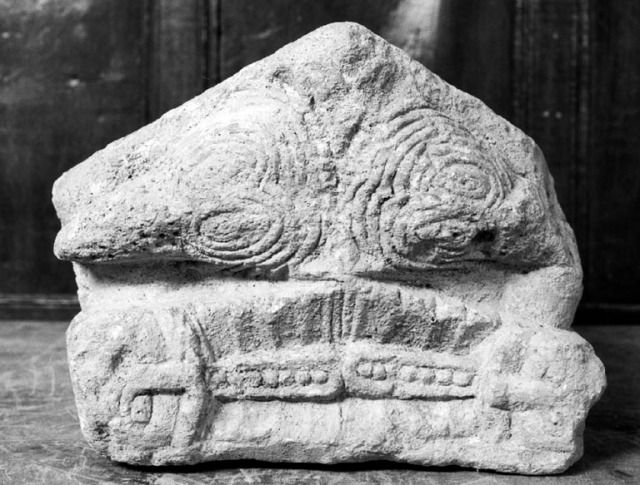 This Reading Abbey double springer supported arches to the left and right, with bird beakheads and beast heads alternating in each arch

At Tortington, West Sussex a similar arrangement can be seen on the chancel arch. 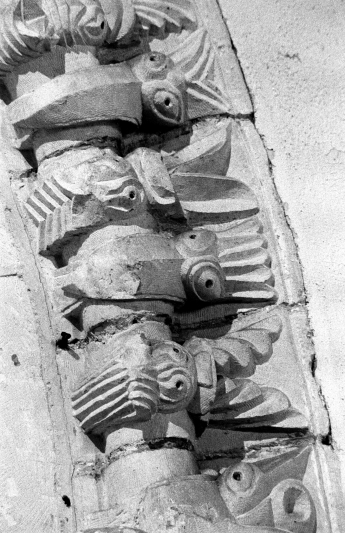 Beakheads appear in Romanesque sculpture in the British Isles, as well as in Anjou, Normandy and northern Spain. In Ireland there are examples of Romanesque arches decorated with heads, but not all are beakheads. Some of the finest Irish beakhead is found on the west doorway of the Nuns’ church at Clonmacnoise (Offaly), and it is unusual in that the roll clasped by the beasts’ heads is free-standing and gripped between their upper and lower jaws. This treatment of the ornament has parallels with continental beakhead like that at Saint-Fort-sur-Gironde (Charente-Maritime) rather than with English examples, which led George Zarnecki to suggest that the pilgrimage to Santiago de Compostella may have been an important factor in the introduction of the motif to Ireland.
On mainland Britain, beakhead is overwhelmingly English; there are no Welsh examples, and only one in Scotland – close to the English border at Kelso. Within England the distribution is extremely uneven. Beakhead is unknown or very scarce in Kent, Hertfordshire, Dorset, Lancashire, Bedfordshire, Northumberland, Shropshire, Leicestershire, Warwickshire, Somerset and even Herefordshire, but in Yorkshire there are more than 50 sites with beakhead, and there are a further 40 in the area between the Chilterns and the Cotswolds, covering the counties of Berkshire, Oxfordshire, Gloucestershire and Buckinghamshire. This suggests that just a few workshops of sculptors were responsible for the introduction of beakhead into England, and the evidence strongly suggests a connection with royal works carried out under King Henry I (1100-35).

Henry’s lands in Normandy were concentrated in the southern part of the Duchy, and in this region we find a kind of arch decoration that is closely related to beakhead. At Tavant (Indre et Loire) is a doorway whose arch is decorated with fluted leaves enclosing pine cones, similar to those seen among the fragments of Reading Abbey and on the doorway of the related church of Great Durnford (Wiltshire).

The pine-cone motif at Tavant (Indre-et-Loire) 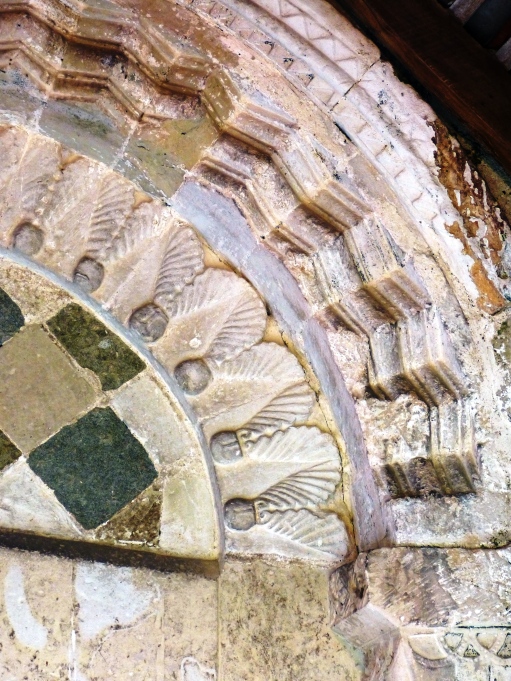 The north doorway of Great Durnford, showing the “shuttlecock” motif

The spread of beakhead from Reading may also be linked to patronage around the court of Henry I. Roger of Salisbury was one of Henry’s principal courtiers: Bishop of Salisbury from 1102 and Justiciar of England during most of Henry’s reign. In his buildings at Old Sarum cathedral and the castles of Sarum, Sherborne, Devizes and Malmesbury he followed his king’s example in producing magnificent architecture, lavishly decorated. Very little of it survives, but it is not surprising to find that further examples of early beakhead, dating from the 1130s, come from Roger’s buildings at Old Sarum and Sherborne. A bird beakhead from Old Sarum belonged to the arch of a doorway, while the Sherborne beakheads, carved with birds’ heads on either side of a roll, originally decorated the vault of a hall or chapel. Roger’s nephew Alexander was to become Bishop of Lincoln, and it was his remodelling of the west front of Lincoln cathedral that included the beakhead ornament mentioned in my opening paragraphs. As well as this kind of courtly and dynastic transmission of the ornament, the beakhead used at major sites like Reading and Old Sarum was copied locally in parish churches, especially on doorways, but occasionally too on chancel arches and vault ribs, like those in the church of SS Mark & Luke at Avington, only some 20 miles from Reading. 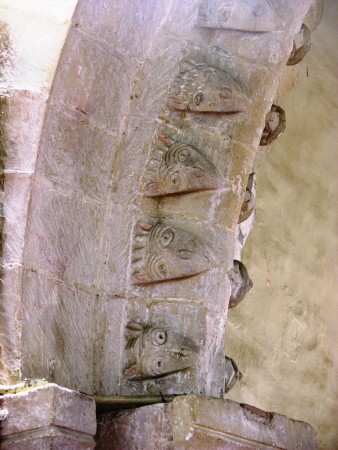 Beakheads on the chancel arch at Avington (Berks)

The search for the origins of beakhead has led scholars like George Zarnecki in the direction of Anglo-Saxon manuscript illumination, but there are obvious difficulties in accounting for the transmission of late 10th-century manuscript motifs into stone carving more than a century later, and without anything in the way of convincing intermediaries. A more fruitful line of enquiry for beakheads in general might again be via the patronage of Henry I, and the crucial monument may be the keep of Norwich Castle, started by William II, but probably substantially built by Henry I before the foundation of Reading Abbey. The main doorway was decorated with a simplified proto-beakhead design, ingeniously christened “beaker clasp” by Heslop, both in the archivolt and on the jambs, a type of ornament that was to gain some popularity in its own right. It consists of a series of tapered and chamfered stone bridges like drinking-beakers resting on the angle roll. 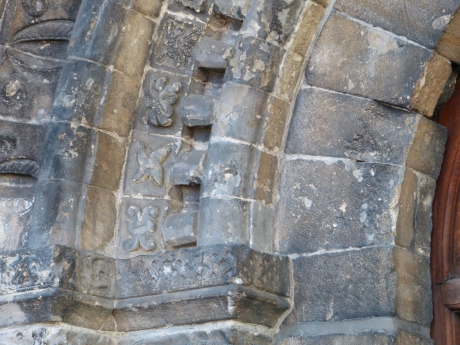 The designs used at both Avington and Quenington were almost certainly  copied from Reading by local sculptors. The beaker ornament was widely used at Norwich Castle for decorating window arches and blind arcading on all four main facades. The motif produces alternations of light and shadow across the arches which are effective in conveying a feeling of richness and solidity, and which echo similar effects produced by the corbel tables and battlements. In this view of the development of beakhead ornament, the figural carving of the beakheads is an embellishment of a motif whose original purpose was to provide texture through the alternation of light and shadow, in much the same way as the chevron ornament with which it is often combined.

Even if the original purpose of beaker clasp was the creation of light effects, there is no doubt that the beakhead that developed from it became an important way of introducing grotesque and monstrous images into the decoration of arches. Just why twelfth-century sculptors and their patrons considered this appropriate for sacred buildings is a question that has exercised commentators since Bernard of Clairvaux, questioned its purpose in cloister decoration in the 1120s. The Abbé Auber, writing in the nineteenth century, considered that gargoyle waterspouts were devils conquered by the church and set to perform menial tasks, and later in that century and in the early part of the next it was fashionable to look for moral messages by identifying monstrous creatures with the animals described in Bestiaries, which had Christian ethical messages attached to them in the text. A more convincing explanation, developed in the work of Michael Camille, is that these terrifying creatures represent the sin and vice that fills the world, which must be rejected by the man of God. The predatory birds and fierce beasts of Reading cloister; the grotesque and obscene corbels that surround so many churches, and the foul creatures that cluster around their doorways are there to remind us that the world is really like that, however beautiful and serene it may appear, and that the only refuge is to be found in the Church.

G. Zarnecki, Romanesque Lincoln. The Sculpture of the Cathedral, Lincoln 1988.

This entry was posted in Sculptural Ornament. Bookmark the permalink.