To be clear, I am using the word canon here to signify a list of works accepted as being representative of Romanesque sculpture. This is not necessarily the same as a list of works accepted as being of the highest quality, especially as art historians are notoriously cagey about identifying quality (which is sometimes, though not always, equivalent to craftsmanship). Authors writing about Romanesque sculpture must decide which works to write about; teachers of the subject must choose the slides to use in their presentations, and such decisions will define their view of what Romanesque sculpture is. So your list might not be the same as my list, in theory. In practice, however, things are a little more treacherous.

The first thing to bear in mind is that Romanesque, as an adjective, along with Norman, its predecessor in general use, was initially applied to architecture rather than sculpture or painting. It was defined in architectural terms, and in using it to describe sculpture it could only refer to the carvings that ornamented these round-arched, thick walled buildings.  While Romanesque buildings were indebted to Roman architecture, there was no necessary connection between Romanesque and Roman sculpture. Sometimes similarities existed, but more commonly they did not. 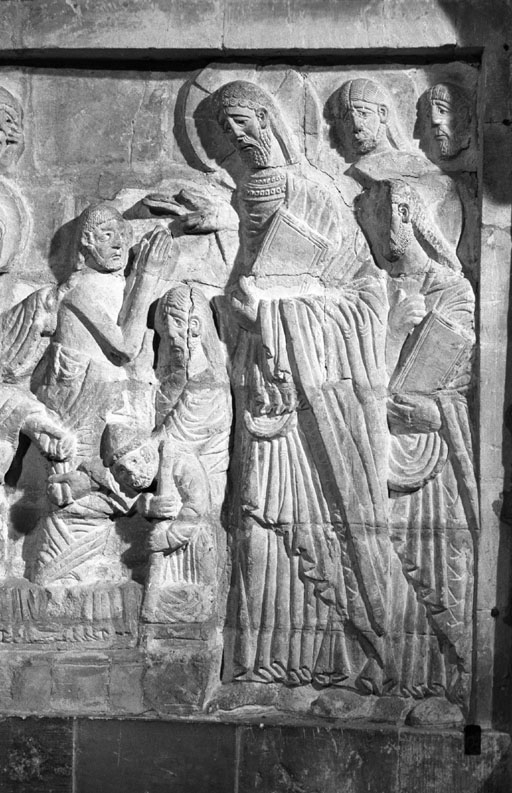 The Raising of Lazarus (detail), Chichester Cathedral. Dated c.1000 by Prior & Gardiner but now generally assigned to the second quarter of the 12th century (© Kathryn A. Morrison)

This has important implications for the whole idea of a canon, because when we come to look at the various lists we notice that not a few of the objects lack a precise architectural context, and dating becomes a matter of connoisseurship. Take the Chichester Reliefs, for example, two panels depicting Christ Arriving at Bethany and the Raising of Lazarus, displayed in the south presbytery aisle of Chichester Cathedral. They were behind the choirstalls of the cathedral in 1829, but it is by no means certain that this was their original position. Dating them was problematic because there was nothing dated to compare them to. The closest parallels were with 10th-century manuscript painting and ivories, and the consensus until well into the 20th century was to assign them to the years around 1000 AD, and to speculate that they may have been imports from the lost minster of Selsey.

Edward Prior and Arthur Gardiner’s An Account of Medieval Figure Sculpture in England, published in 1912, may be considered the first serious attempt at an account of English medieval sculpture, and the authors accepted the 1000 AD date for the reliefs. Since the 1950s, Zarnecki’s redating of the reliefs to the 2nd quarter of the 12th century has been generally accepted, and it is based on manuscript parallels, notably with the figure style of the St Albans Psalter. This is no place to discuss the extent of the validity of comparisons between works in different media, but I will doubtless get around to it in a future post.

Having brought Prior and Gardiner into the discussion it will be as well to begin my analysis of the Romanesque canon with their work. I should first say that Romanesque was not their favourite period of medieval sculpture. As I have argued in my post on their work, Romanesque was presented as a stage on the road to a sculptural perfection that was achieved in the second half of the 13th century in the Judgement Portal at Lincoln. Nevertheless, a canon of dated Romanesque sculptures can be extracted from their work, and to avoid clogging up this post with a long list I have posted it separately here.

There are fifty one sites in the list, and it is a tribute to the lasting value of Prior and Gardiner’s achievement that my readers will probably recognise most of them. On the other hand, it might be a worry to find that the bulk of the Romanesque canon was established more than a century ago.  Where we no longer agree is on the issue of dating. A group of works that Prior and Gardiner dated well before the Conquest is now universally dated up to fifty years after it. Apart from the Chichester Reliefs, discussed above, what they have in common is a degree of stylisation in their figure drawing, characterised by our authors as crude or savage.

The relief of St Michael and the Dragon at St Nicholas’ Ipswich, dated by Prior and Gardiner c.1000 AD

The table gives ample scope for analysis, but I just want to make two points here.  First, most of the works chosen are figural, many narrative. This explains the concentration on relief panels, tympana and fonts, which have large fields available for extended scenes. This fits in with the authors’ larger aim, which was to propose a model of development that moved in the direction of naturalism (by the later 13th century) turning to excess and visual depravity in the 14th and 15th centuries. For more on this, see here.   The second point is that the practice of sculpture has no place in the list. Prior and Gardiner divided Romanesque sculpture into that based on drawing, that based on painting and that based on metalwork; a legacy that has lasted for far too long. What is omitted is the possibility of a sculptural tradition. The list is therefore unbalanced as a survey by (for example) a focus on just a few related groups. Four of the entries are the work of the Herefordshire School, and three on the workshop of St Peter’s, Northampton. These are important works that merit inclusion, but the picture is unbalanced by the use of so many of them, when there is nothing at all from the Yorkshire School and none of the fonts of the Aylesbury group in the list.  The over-reliance on a style model is obvious in their treatment of Kilpeck, where the south doorway is dated a quarter-century later than the chancel arch and corbels, despite belonging to the same sculptural campaign.

My second example of a canon is that provided by George Zarnecki in the two little Tiranti volumes he published in 1951 and 1953; English Romanesque Sculpture 1066-1140 and Later English Romanesque Sculpture 1140-1210. This is clearly a much more serious piece of work despite containing only just over 100 pages of text between the two books. They are basically a series of plates with captions; 82 plates in volume 1 and 133 in volume 2. The intention to produce a national survey is made clear by the inclusion of a map of sites as a frontispiece to volume 2, showing that the entire country is pretty much covered.

The most obvious difference between Prior and Gardiner’s canon and Zarnecki’s is the doubling of the number of sites. This was achieved partly by expanding the area of coverage in an attempt to include the whole of England, and partly by Zarnecki’s policy of examining the sculpture on its own terms. His aim was not, as Prior and Gardiners had been, to justify a model of artistic production, but rather to find out how medieval sculpture was produced. He studied the changes in sculptural practice brought about by the Conquest, which meant examining what had gone before, and explored the survival of Anglo-Saxon forms after the Conquest. He tracked the influences from Continental sculpture associated with the Conquest, and identified changes in workshop practice that went with new building methods. For example, post-Conquest sculpture was dominated by the capital, a feature all but unknown in Anglo-Saxon building, but the dominant form of post-Conquest capital in England, the cushion and its variants, did not come from Normandy.

A capital from Archbishop Anselm’s wall arcading at Canterbury Cathedral.

He was always interested in tracing the movements of craftsmen: from Canterbury crypt (which he dated to c.1120) to Westminster Abbey, Reading (whose sculpture was discovered after Prior and Gardiner’s work, partly by Zarnecki himself), Winchester, Romsey Abbey, Christchurch Priory and elsewhere. He also explored the workshop that was active in Castor (apparently dated by an inscription to 1124), Wansford, Sutton and Maxey in the Soke of Peterborough. 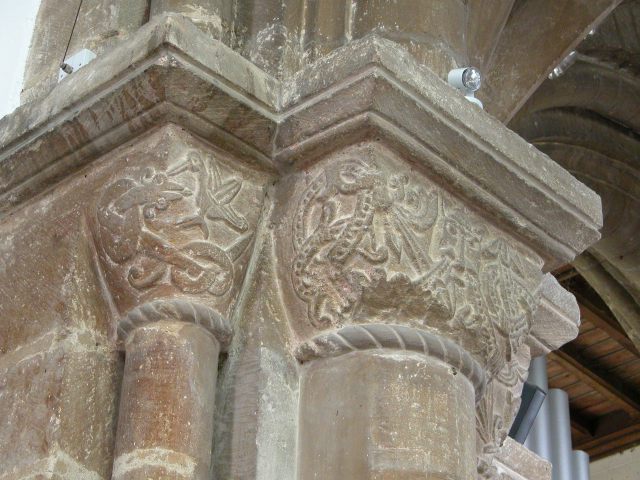 The Herefordshire School was examined in detail too, as well as the Yorkshire School, one centred on St Peter’s Northampton, and three groups of late-12th century fonts in Buckinghamshire, Norfolk and Cornwall. All of this research vastly increased the size of the canon, and went some way to relating it to sculptural practice. He was aware that English Romanesque could not be properly appreciated until all of it was known, which was why he establish the Corpus of Romanesque Sculpture towards the end of his time at the Courtauld Institute.

This entry was posted in Historiography. Bookmark the permalink.